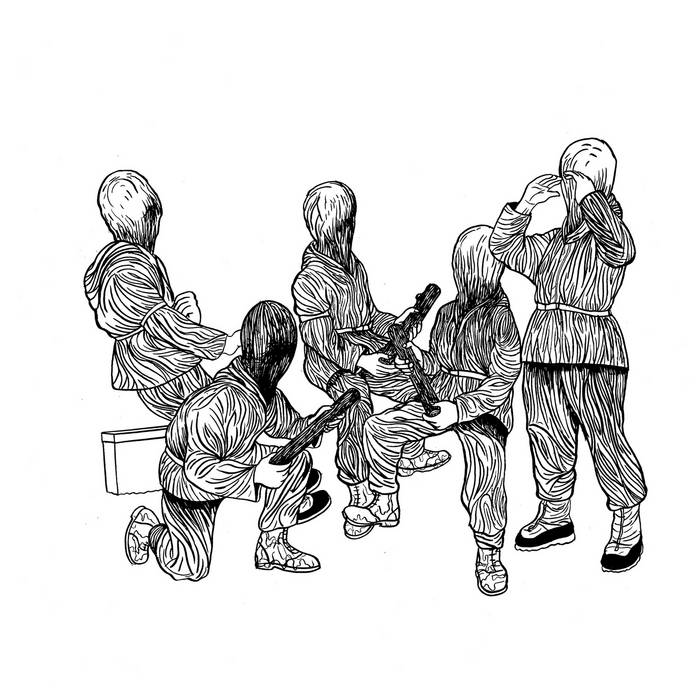 The Rote Laterne (trans. Red Lantern) starts suddenly like a detective TV show theme tune which we are immediately humming along to despite never having learned the lyrics before. It's a theme that reminds us of the laconic loners who dwelled in the early evening TV schedule and so were a firm fixture in our childhood: gangsters or cops who's paths were accompanied by a melancholy whistling. Romantics! Hannes Hajdukiewicz's version takes Le Millipede's original and shoves it like a fist into an old glove. And then things really take off: trombone, pianet, melodica hum hum, bass and bamboo drum du du. All the time there's this du du that's the highlight. du du in front of the mirror, du du in the vesitbule for a romantic encounter, who are you du du?

Mathias Götz, who gets his alias Le Millipede from the fact that only a millipede would have enough feet to simultaneously control enough buttons, levers and pedals to color his compositions so richly, in a way that no synthesizer alone could do. As a musician Götz is a true all rounder, having played in orchestras and big bands and currently active in the projects Alien Ensemble and Hochzeitskapelle. He gives us a glance back at those childish, first early steps in making music like a young rambler who hums before his mouth can form proper tones. It all starts with a sense of awe – later this becomes polished. Like having the courage to let something go and to look, what do you do with it.

And so a box of building blocks is opened which the play friends all draw to. Nine tracks from the celebrated debut album, one from the single – the repertoire of songs is rounded down and made malleable. Thus the Die jährlichen Winde version by 1115 sounds as though it could be a preliminary offering from their own album which is coming out in June. Happy Planet Index is snow-tire dub by Protein, who are currently busy touring with The Notwist and with LeRoy. The latter turns Herbst (trans. Autumn) into a gummy-bear-Bossa-hop (does anyone still remember Antihund?). By the time super producer Olaf Opal gets to work we're done with all the toy clock, schellac and tinker toy aesthetic. Now you're getting shaken and stirred in an emo style. Saroos build on the disco-kraut mesh of Marmor. While Joasihno take a more Arvo-Pärt approach: sometimes one tone is enough, so let's just leave it at that. Now we are reaching the greyzone of consciousness. The Alban Endlos rework of Johann Palisa could have also come from his own album Goldene Welt. And finally with Dirk Markham aka Droks Wonky mix we meet du du's brother, he's called bom bom.

Let's take another calm deep look at the looking glass, this electro-acoustic mirror, and check it for accuracy. Mirror Mirror really works as an album! You can take a trip through this album and find yourself at a convention for sound nerds. Or witness a match between pros; but one where it's not about any comparison of individual strength, rather a summoning of the good old idea of club spirit (does anyone remember Jimmy Draht?). It's about stretching out and filing down the material, mixing and blurring. Just like in cooking, or more precisely in baking. Which by the way is a good trick: set up a mirror when you're eating – that way you have twice as much on your plate. And you'll feel one portion less hungry.

This is how something new comes from something old and something old out of the new. A thousandfold appendixes. Certainly more entertainment than all the cooking shows on cable and detective series on public TV going out over countless evenings on the idiot box. And, lets to it in style! There is more quality pop on Mirror Mirror this than you'll usually hear on daytime radio. The music of the last century is reflected here. Just take a look and you will recognize yourself, blinking, in the setting of a music hall carnival of the anthropoids and ecdysozoans. For us humans all that remains is longing or music to slip into the skin of another.

Text by Pico Be

Bandcamp Daily  your guide to the world of Bandcamp